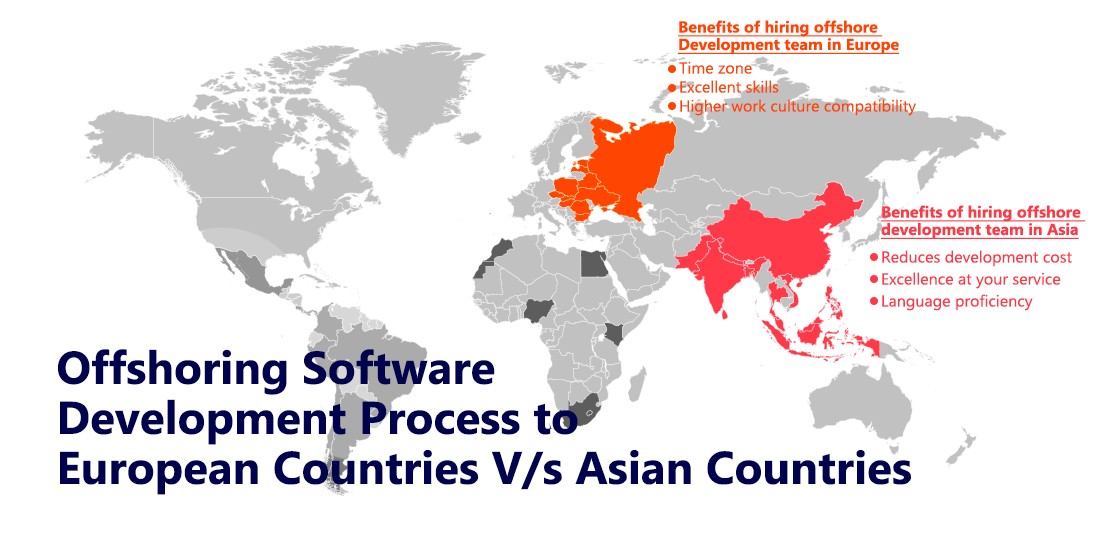 Offshoring the software development team is booming in the current technological world. Most of the big countries are turning towards developing countries in search of excellent talent. Top locations renowned for serving the best offshore development are North America, Western Europe, Eastern Europe, Asia, and Africa. Among these North America is one of the biggest hubs for software development. But it is a shelter for the economically sound and established firm because North America is also one of the most expensive cities in the world. The very first reason for which software development companies look for offshore software Development Company is cost-cutting. If again you tend towards the most expensive city then leaving your native team and hiring an offshore developer will not make any difference to your business strategies.

If your intention of choosing a dedicated offshore software development team is finding the best talent then again several countries are having a pool of talent and are renowned for the greatest innovations. Several Asian countries have emerged as technological masters in recent years and have given us the best software development experts with thriving and innovative apps transforming the business world and also social lives.

The topmost Asian and European countries preferred for offshoring software development are:

Asian countries were the pioneer for offering the most effective and affordable software development services for a long duration. Also, the countries in Asia have the best technological talent who have gained expertise in the latest technologies making radical transformations in every business sector and making the jobs simpler, faster, and promising. These countries are mostly preferred by western clients for several decades. The most preferred offshoring destinations in Asia are India, China, and the Philippines.

The biggest benefit of choosing an Asian country for setting up an offshore development center is the economical prices. If you are a start-up and looking for a team with affordable prices then you must choose Asia. Here, you will get premium professionals for the least possible prices cutting down the biggest expense from your list.

Excellence at your service:

Asian countries have different languages but still, you will get professionals with higher proficiency in the English language. Hence there will be no such communication barrier even if you select an Asian team for your project development.

Europe is the hub for all IT companies. Most of the technological giants have established their base in various European countries and have highly skilled teams to execute their operations effectively with proper and appropriate business growth. Educational standards of European countries are higher than any other country all across the globe and hence creativity and possession of the latest technologies are in abundance in these locations.

Most western countries look for offshore development centers to get the best solutions for their requirement. By choosing any European country for hiring offshore development team they will be sharing the same work cultures. It makes work much faster because both the client and the team will be working with the same business strategies giving no room for confusion or clashes.

European countries have almost the same time zone as other western countries allowing them to work at the same timings. Working simultaneously allows the client to build a stronger bond with the team with continuous communication.

Europe or Asia: Which is your perfect place?

For hiring an offshore software development team, Eastern Europe and Asia are having tough competition. Most of the companies get confused about which one to opt for. The choice of location depends on your business requirements and your priorities, such as technology, time zone, capital investment, a huge team with multiple options, and more. Here are a few comparisons between the offshore development centers of both locations.

Most of the business, either big or small, looks for a smart way to run their business with less capital investment and higher returns. Eastern Europe is undoubtedly a giant brand for technological development but the standards of living in that city are high with a higher economy. In such a location the pay scale of a professional developer is very expensive. Building an entire team of professionals may consume more than half of your capital. If you are having a well-set budget to invest then choosing an offshore development team will serve you with your objective. But if you are a start-up or an organization with a lower budget then choosing European countries for your offshore development center will not be a wise choice.

In such a case, Asia can serve you with a prominent and one-stop solution. Comparing with European countries, the economy of Asian countries is feebler and that makes the perfect gateway for all the start-ups to get the best and the most professional services at the most affordable price.

The pool of talent:

Software development is the craze for students in today’s technological world. Most of the students are now willing to build their careers in the IT sector with the most handsome salary, resulting in the production of endless developers every year. The scenario is the same for every country all across the world. But if you compare the numbers of software engineers graduating each year in Asian countries and European countries, then the number of Asian students lead by 30-40%. Approx. 1 million of software developers are graduated every year in just India.

Time zone is an important factor and plays a crucial role in keeping you connected with your offshore team. If you are your team are working in the same time zone then communication becomes much easier. If compared to Asian countries and European countries for western clients, then European countries will be the prior option for them to hire an offshore software development team. But for this problem with overlapping hours can give you a prominent solution. Different time zones can’t restrict you from getting the best technological experts for your business development. Being different time zones, you can communicate more during the overlapping times when both countries have working hours. Apart from this, you can also opt project management tool to keep pinpoint details of your project to keep your team in your touch 24/7.

In terms of language proficiency, European countries will be more comfortable being the same language speaker. But professionals of Asian countries are also well equipped with the English language has possessed higher proficiency in the language, and have crossed the barrier of communication.

The offshoring development team is a recent trend in the global IT sector. Most of the western countries run short of top professionals, and also the professionals available in their native place are highly expensive. As a solution, most of the businesses from western countries drive towards other countries to find the best team. In the Offshoring development team industry, Europe and Asia are two top places where most of the entrepreneurs’ rush to expedite their business.

Both options have their pros and cons, but if compared on various aspects required by a business to attain success, Asia is the better option with several benefits and least disadvantages. The constant need for software development in today’s modern world requires a team that can serve the business for a longer duration without consuming major capitals and giving higher returns. Taking these aspects as the biggest concern, now India has become the prior most choice of businesses to set up their offshore development center.