How to ensure security standards in Mobile App Development?

How to ensure security standards in Mobile App Development? 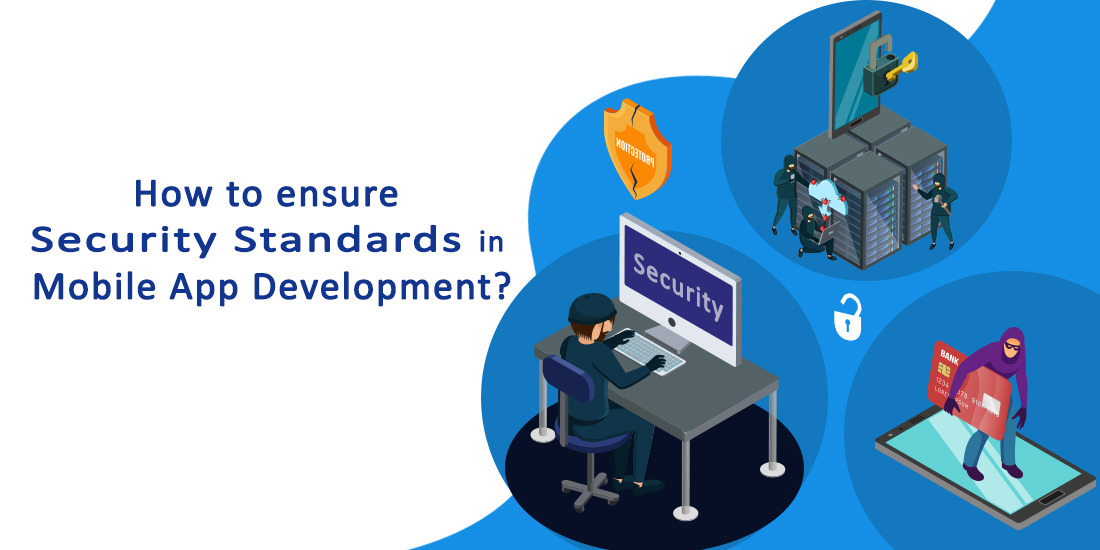 We are living in a digitized era where none of the folk is untouched by the smartphone. More usage of smartphones has made us addicted to saving all our crucial data on the same device. In the present life, folks are hooked to a mobile app for every single-use that gives an instant solution for their requirements on a few finger clicks. Either it is about shopping or bank transactions, mobile applications have become a one-stop solution for all the needs. All pros come with cons too, the instant mobile app solutions have become one of the most crucial facets of our lives but it has also risen the risk and has given a gateway to the intruders to breach the network and hamper the privacy of the users. As the use of mobile apps has raped up the sky level, it also demands higher security guaranteeing the safety of digital data.

With the rapid growth of cybercrimes, it is crucial to develop a robust app that offers infrangible security conditions. Most of the businesses are now not only looking for a developer who can serve them with a mobile app development solution but willing to hire mobile app developer in India who can serve with a smart and secure app having a prospective to scale up its security with the increasing risk factors. Well, most of the offshore app development companies in India ensure to design the most robust security systems that maintain high-end security during the entire app development process and also post-deployment.

What are the risks faced by a vulnerable app?

Before developing an app you must be aware of the loopholes of an app that can give a breakthrough to the intruders to enter your network or the device and act maliciously on your secure data. Major risks that are included in app development and must be taken good care of are listed below:

A communication that is held between the user and a third party is conducted via the server. Hence most of the invaders make it a primary target to invade into the app.

In the absence of binary protection of an app, it is possible to reverse the mechanism of backend code and to use it as malware in the website. This is the biggest threat to an app.

Another loophole that can provide easy access to the intruder is insecure data storage. Most of the developers use common mobile storage to store all the data but mobile storage is at higher risk of getting hacked.

Transportation layer in-app means the path followed by any data to transfer from one medium to another one can say from client-side to the server or vice-versa. In case you have a poor protection measure over the transportation layer then there are higher chances of the intruder to gain access to the app via transportation channel and to alter or remove from there.

Storing app data at a mobile location which is having lesser security may result in data leakage. If data is store in the device which can be also accessed by the other apps using the same device can lead to leakage and misuse of data.

Authorization and authentication are the most robust solutions that help an app to maintain its privacy and security. A poor authentication method accessible by anyone or can be used by bots may lead to an open gateway for the intruders to easily access the app.

Use of untrusted inputs for security decisions

Most of the developers set different parameters to provide distinct authorities based on their level of access. These distinguished parameters are sensitive and are at higher risk. Most of this parameter that justifies the authority of the users is kept hidden by the developers, but poor encryption can risk the entire app.

Most of the e-commerce portals incorporate longer sessions that are open even after the user switches the app usage. This is done to enhance the user’s experience by enhancing the speed of the buying process but it can be risky if the user has been changed by any means before the session ends.

Mobile app security, the need of the hour:

None of us think about the security of our mobile apps before using them for shopping, or while paying them at various stores. Doesn’t it seem a serious issue to worry about, and they are a few stats that will help you understand the importance of higher security in mobile apps.

This exponentially rising number of malware detection in the apps is alarming hire mobile app developer and integrate a BYOD (bring your own device policy) allowing the user to use it for their professional as well as personal uses without giving any break for the intruders to hack any type of data from the device. If taken a survey, it can be easily estimated that approx. 86% of companies are now rushing to hire dedicated mobile app developers in India to develop their own app setting robust security solutions.

What can be the result of malicious activities or hacked apps?

Crucial tips that can assist you in increasing your app security:

Mobile malware is one of the most critical aspects that inject vulnerabilities and bugs in the design of a mobile app. The study says more than 12 million apps have been hacked from the source code and most of the hacker uses the same source code with a repackaging to launch a rouge app like yours. To avoid hacking of your source code you must keep your code encrypted. For example, JavaScript is one of the easiest languages to code and also to read. Using minification can help you making your code difficult to read or interpret and if you encrypt your code then it will help you making your code hard to decode or access.

Native app limitations for each platform:

If you are developing native apps for different platforms then you first understand the limitations and features offered by the platforms for app development. The same code may serve you with the same features on a different platform but the security solutions might be different based on the chosen platform norms. Before coding any native app you must check the limitation and then must proceed with the programming accordingly.

To mitigate the possible threats of apps and devices, most of the enterprises started using MAM (Mobile app management) and MDM (mobile device management). Using these technologies enterprises are availed with an option to develop their app store helping them limiting the distribution of their app.While check for the MAM and MDM vendors always choose the best options ensuring the highest security standards.

Data transferred from the client-side to the server-side must be sent with great security ensuring zero leakage. By providing support for VPN or SSL you can cover your app with strict security measures and can avoid eavesdropping of intruders.

Only an app which is written to interact with the backend API can access the code, is one of the biggest myths in the software development world. Any malicious act can connect with the backend servers if not protected easily. Before integrating any APIs with the app, it is important to Verify the abilities of the APIs based on the selected mobile app development platform.

Use of latest crypto graphing techniques

A thorough QA and security check

To make your mobile apps robust against all the possible threats and secure it from upcoming probable intruders, it is necessary to conduct a thorough check over the app for all possible security scenarios before deploying the app. If you are open with the capital investment then you can include a professional hacker in your team to check all the possible loopholes that need to be secured to avoid all types of threats.

Cache memory is a component possessed by almost all web solutions. It is a small memory space in the device that stores the last access components on the local device to avoid delay in retrieving the last accessed data. Skipping the encryption of cache data will result in giving a pathway to the intruders to detect the last act and enter into the app using the same data. Hence, it is mandatory to encrypt the cache memory also.

It is one of the latest methods used by mobile app developers to restrict hackers from penetrating inside the app. The method is very simple like encryption of data. In such a technique, the entire code is obfuscated in a format that is not understandable by humans.

Code obfuscation includes few strategies that make the hacking of an app impossible, such as encrypting partial or complete code, removal of metadata which can reveal basic details about the app development, renamed classes and variables to make it private.

The rate of hacked devices and apps has been ramped up exponentially, but it doesn’t mean that developing a secure app is impossible. Hire mobile app programmers in India, well-equipped with the latest technologies and tools required for secure app development can help you develop an app that is hard to penetrate. At the very first hand, a developer must ensure to encrypt the entire essential codes limiting any external source from getting hitched with the data of the app in any means. There are several tools used by the top mobile app developers for ensuring the securing of the apps, such as Android Debug Bridge, Quick Android Review Kit, etc. help you detecting the loopholes of an app before you deploy it. Apart from testing, integrating verified APIs, encoding the codes with the latest techniques, boosting the security on the server-side, enhancing the security of data transportation layers between server-side and client-side, etc. are the major solutions that you can use to protect your app from all the possible malicious activities.

Which type of developer must be hired to get the secured app?

Security is a concern that must be taken care of for every type of development. Regardless of the choice of technology you are choosing for your app development, you must check whether the developer is well-equipped with the dependent technologies used for developing an app with all security measures or not.

Does adding security to the app increases cost also?

To enhance the security of an app, we incorporate various tools and technologies making a slight difference in the cost of app development but it secures your app for the long run from all the breaches and digital threats.

What security parameters do you incorporate for app security?

We use most potential tools and technologies for developing a secure app that includes encrypting your backend codes, securing data transmission layers, securing data storage, use of security analysis tools, and more. Each task conducted during and post-development of the app is intended to maintain the security of the app and make your app safe from all the probable threats.