Top things to consider prior to hiring react Native developers

Top things to consider prior to hiring react Native developers 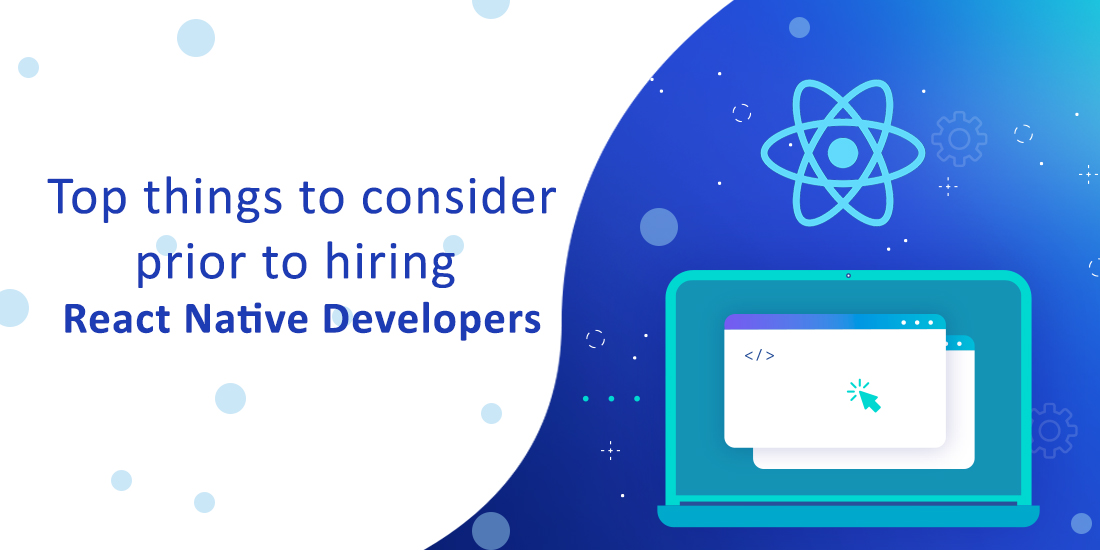 Many of us can easily relate the current socio-economic scenarios with that of the ones that existed decades back. Both the situations were entirely different and no one could have ever imagined things would be ramping up quickly that takes the whole landscape to the next level. Traditional ways were so tedious because it consumes a high amount of time, the process was very slow, and the impact it had on society too was not that much appreciable. The advent of technology and related gadgets has brought more light into the picture. Digitalization has become increasingly popular, each and every vertical of society got redefined and lives have turned out in becoming highly productive and easygoing.

The recent decade saw the rise of revolution in the smartphone industry. Numerous brands have come up with hundreds and thousands of stunning smartphones over the years, one differing from the other based on new technology findings and insights. The revolution followed by the advent of smartphones has ignited a spark that leads to the digitalization of wholesome scenarios. It has redefined the lives of individuals of all nationalities, age, sex, and financial status. Smartphones have acted like a lubricant that reduces the friction off not only from the human lives but also as the one which has added more transparency to the in house business operations. Smartphones have level shifted the lives of many and the list comprises of individuals of every kind, enterprises, and micro, small, medium to futuristic startups and global fortune companies. Everyone has made the most out of smartphones and were able to make it big when compared with the traditional patterns and methodologies.

Mobile apps and their applications

Just like there are diversified numbers of mobile applications, there are numerous ways of developing it. Mobile app development is a process that involved the integration of a large number of technologies such as Artificial Intelligence, Machine Learning, Blockchain Technology, the Internet of Things, etc. Mobile apps are built for precise platforms such as Android, iOS, windows, etc. There are technologies available in the market that helps developers come up with futuristic mobile applications that help businesses engage much with the end-users. The process of mobile app development is a process that requires a huge amount of expertise and one should consider hiring top developers to avail of the exact services they are looking forward to having.

As the trend of hybrid mobile app development started increasingly popular, React Native has also gained momentum along with it. It has turned out in being the perfect platform for all the hybrid app developers out there. Also, enterprises and organizations started preferring more to react native apps because of the advantages it put forward. It took no longer to React native in becoming the active representative of hybrid or cross-platform app development. Businesses have made the most out of react native and started availing revolutionary and futuristic mobile applications. The app built using React Native has turned out in being the buzzword. React Native offers a wide array of advantages for businesses out there in making it big in the least possible time. React Native was developed by the tech giant Facebook in the year 2015. The platform has gained huge traction from the potential community as it is capable of meeting both the developer and user requirements to its fullest.

React Native is designed to deliver the best performance and the wholesome of its beneficiaries is much satisfied regarding its performance. React Native acts as one of the best tools that help the developer community to deliver precise results. It helps businesses in availing world-class levels of mobile applications that enhance their organizational growth and capabilities.

When it comes to code reusability, react-native possesses a high degree of transparency. It helps the developers save potential time that they have to spend on rewriting the code otherwise. It also enhances the development speed thereby allowing businesses to avail world-class levels of services in the least possible time.

The react native platform as a whole is highly stable that the developers can experience in real. This stability can add more value to the development process and allows businesses to stay ahead of the race. Stability plays a key role in ensuring the various aspects of the app.

The React Native is supported by a wider community consisting of well-versed professionals and developers. Enhanced support from this community can help upcoming developers in clearing out their doubts in a seamless manner. The supportive community has played a major role in making the react-native platform much popular among the common man.

React Native comes with the ability to seamlessly integrate it with third-party plug-ins. This makes the wholesome of the development process frictionless and productive. Businesses can leverage the most out of this facility as it offers them seamless support to enhance their business bandwidth. The third-party plug-in support offered by the React Native platform is so profound that it brings out the best in businesses.

React Native comes with enhanced libraries that can be accessed in a seamless manner. These enriched libraries and its vast applications help developers in bringing the most out of it. Businesses can rely upon these libraries in availing of the exact solution what they are looking forward to having. This enhances the usability of the mobile applications and its rate in engaging the customers to its fullest.

One of the major criteria that make React Native every developer’s cup of tea is its ability to deliver precise results in a much faster mode. For developers, they find this as a boon that helps them stay ahead of all the hassles and bustles. The faster development mode also helps businesses in reaching out to their potential set of audience in the right manner at the right time.

As React Native mobile applications are gaining huge traction from the global community, the need for well-versed resources also started to skyrocket. One needs to pay much attention to various factors in detail prior to hiring React Native developers. Let us see in detail what those requirements are.

One can only come up with a well-versed react Native app if and only if he has the entire mastery over various tools such as Atom, Nuclide, Visual Studio code, ESLint, etc. The developer hands-on experience over these tools can help the end consumers in exploring the unexplored domains of their business.

Though react Native is not as same as native apps, one way or the other it is connected to native app development platforms. The knowledge a developer has on React coding can help him in working over React Native in a seamless manner.

Onboard the best React Native talents who are highly skilled and capable of meeting your organizational requirement to its fullest from the house of DxMinds Innovation Labs. DxMinds is a leading product engineering and resource hiring agency having its presence all across the globe. DxMinds has its corporate offices and active representatives in regions like India, the USA, Australia, Peru, and the UAE. The React Native development services offered by hiring well-versed React Native experts at DxMinds can take your business above and beyond your expectations.

What are the advantages of React Native over Native apps?

Which platforms are supported by React Native apps?

iOS, Android, and windows are the major platforms that is actively been supported by the React Native apps.

From where can I hire the best React Native developers in India?

DxMinds Innovation Labs, a leading resource onboarding agency in India helps its customers in availing services of full-fledged developers in a timely manner.

Does DxMinds have any engagement models?

Yes. DxMinds do have a wide array of engagement models such as fixed cost models, ODC, Build, Operate, Transfer, etc.

How much does it cost to develop a React Native app?

The cost of developing a React Native app purely depends on various aspects like the scope of the project, business requirements, technology integrations, and much more.