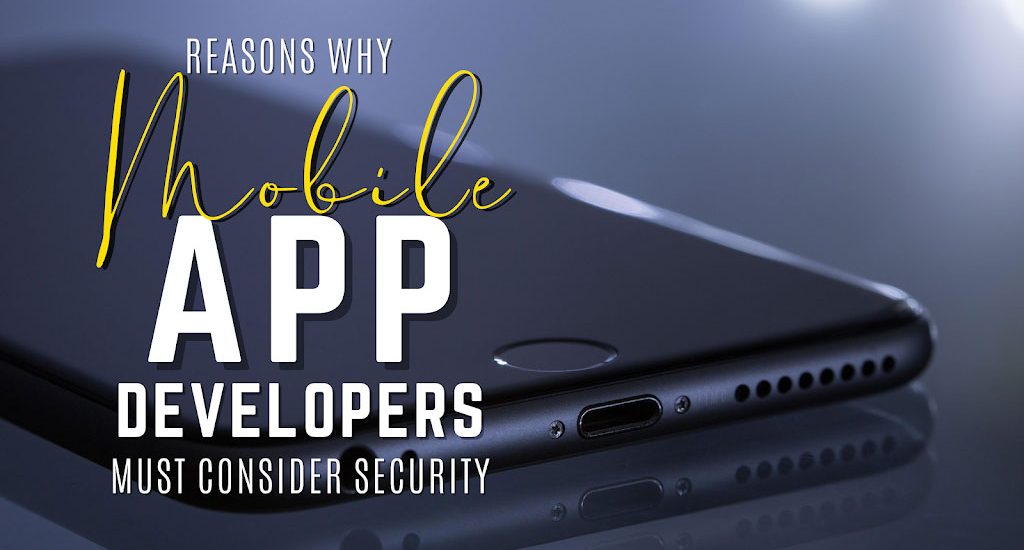 About 67% of the world are mobile phone users, owing mostly to mobile applications or apps increasing each year rapidly.  The global pandemic that pinned us temporarily to our homes due to social distancing rules heightened the demand for mobile apps, but this rapid demand does come with security risks.

Regrettably, not all consumers and even mobile app developers themselves see the importance of mobile apps security. Hackers and cyberattackers are taking advantage of either the naivete, or lack of know-how, or simply absence of initiative to stay protected.

Regrettably, not all consumers and even mobile app developers themselves see the importance of security for mobile apps. Hackers and cyberattackers are taking advantage of either the naivete, or lack of know-how, or simply lack of initiative to stay protected.

Unsecured mobile applications pose extreme risks not just to consumers but also to their developers. Vulnerabilities are exploited by cyber thieves that watch out for anyone they can victimize through malware attacks or data breach.

Often, it is a little too late when developers and consumers get concerned about cyber protection.

Mobile app securityis the protection level mobile applications have against malware and cybercrime. The different technology and development processes used in mobile app protection are targeted at mitigating all sorts of cyber threats that mobile devices pose due to the applications installed in them.

The danger rises inaccessible systems like Android, which is twice as susceptible to malware assaults and breaches in data compared to iOS, which is exclusive to Apple users.

Since Android is an open framework, it is more vulnerable to MITM attacks (man-in-the-middle), accidental data breach, unauthorized access, and compromised cryptography.

How will developers defend their apps and users from privacy risks and cyberattacks?

Why Secure Your Mobile App?

Most of the world’s workforce are freelancing or remote working nowadays, whether it is by choice or brought by the global pandemic. Even before all these, a lot of businesses have begun distributing teams, applying the BYOD system in their companies.

A BYOD (Bring Your Own Device) system means the employee, remote worker, or freelancer that uses their personal laptop or computer to do work for a company and access its networks. The problem is that BYOD systems have also been prone to attacks. It takes just one employee, unprotected or unsecured, to open the door to a company’s network. Once that door is open, hackers can inject malware, breach data, and invade the privacy of the company’s networks and consumers.

Employees that use their own device may plug in or connect that device to multiple devices and networks outside the scope of protection and scrutiny by their company. Files can be downloaded that contain malware, Trojan, rootkits, and other destructive exploits.

It is also a problem even with in-office employees. An unknowing employee might open a phishing email and introduce havoc to the system. Employees who also use their personal devices may already be exposing the company’s networks to risks as well, just because of unsecured mobile apps they have downloaded in their phones.

Hackers target CEOs and other high-ranking officials in the company to get as much valuable data as possible, in exchange for a lot of money with interested third-party hackers.

Aside from these attacks, all the compliances of a mobile app already expose them to security breaches. Thus, it is crucial for mobile app developers to carefully inspect the security level of any mobile app they develop. They must provide the latest security features to protect user data and privacy.

Mobile security is indeed important. Here are some benefits of having a secure mobile app:

·        protection of confidential and private data

·        protection from malware and virus attack

·        protection from lawsuits and other repercussions of unprotected systems

Mobile app security is something that cannot just be ignored or put secondary to web security. Among the 5.19 billion mobile phone users, 4.54 billion are internet users. A virus that goes viral is deadly to the global, digital community. Mobile app security must be a top priority, for an unsecured mobile app is an app at risk.

The following are crucial to mobile app security that developers must watch out for:

1.  Secure files and database: Developers must store consumer database, credentials, payment information, and the like on a secured device or cloud-based storage or server. Your storage needs to be secured too, fully encrypted, and backed up, with limiteddata access privileges, to prevent any data breach.

2.  Secure Source Code and Avoid Reverse Engineering: Ensure that hackers cannot access your mobile app’s source code or decipher it by using obfuscation, or concealing code and making it unclear, undecipherable, and even confusing. This process hinders cyber attackers from performing reverse-engineering strategies to the source code.  Android has Pro-Guard, a built-in feature that makes codes into meaningless and confusing characters.

Reverse-engineering attacks are more prevalent in Android because it is an open-source platform where anybody can check for source code and modify the OS as per their needs. But doing this requires some level of programming aptitude that not all users have. So mobile app developers must provide safe source codes to reduce the possibility of tampering by cyber attackers.

Unencrypted data transmission is vulnerable and often unsafe. Broken cryptography is insecure usage of cryptography. Encryption-decryption algorithm that is weak or broken can easily be decrypted by hackers who can quickly unleash chaos in the mobile app and upon its users.

6.  Perform Penetration Testing: Penetration or pen testing mimics a malware assault on your operating device to search for any flaws that cybercriminals can abuse. In mobile app protection, penetration testing is widely used to improve WAF (web application firewall).

Before real hackers can and will, it is wise to test your code for any susceptibility to injection attacks. Fine-tune your WAF security policies and patch bugs you find before launching your mobile app. It’s one of Mobile App Security’s most essential levels.

Pen testing is separate from standard software testing, but both are integral to enhancing mobile app security.  Also, make it protocol for you to back, review, and test previously-written code to test for flaws and implement changes or improvements.

7.  Use tokens for high-level authentication sessions: A token is a small hardware unit that enables users to enter a network service. Mobile apps developers utilize tokens to monitor their user sessions efficiently. Tokens can be approved or withdrawn.

The use of complex passwords must be employed as well. Mobile apps should be designed so it will accept only complex passwords with alphanumeric characters that must be renewed regularly, say every six months.

An OTP (one-time PIN/password) is valid for only one login session or transaction on a computer system or other digital device. It can be added to make sign-ups more secure. Adding a two-factor verification also adds a layer of encryption and makes mobile access more secure.

Other authentication methods may include fingerprint or retina scanning. In the future, other biometric access systems are probably going to be introduced to level up to access privileges for mobile apps.

Although indeed, mobile app users must also ensure their cyber-safety, mobile app developers must take the more significant responsibility of producing apps that are secured. Their apps should not be leaving consumers exposed or vulnerable to malicious attacks, privacy breaches, or any fraud.

Mobile app security safeguards the app and the data stored within it. A user can install an antivirus or anti-malware software, use a Virtual Private Network or VPN, but if an app is invaded by hackers and injected with malware, they are still left wide open to cyber threats.

Attacks can vary in severity, and as a mobile app creator, you should prioritize giving a robust level of protection and data privacy to your consumers. Further, companies that are non-compliant with GDPR get penalized, among other massive implications.