Pros and Cons of Python Language that every developer should know

Pros and Cons of Python Language that every developer should know 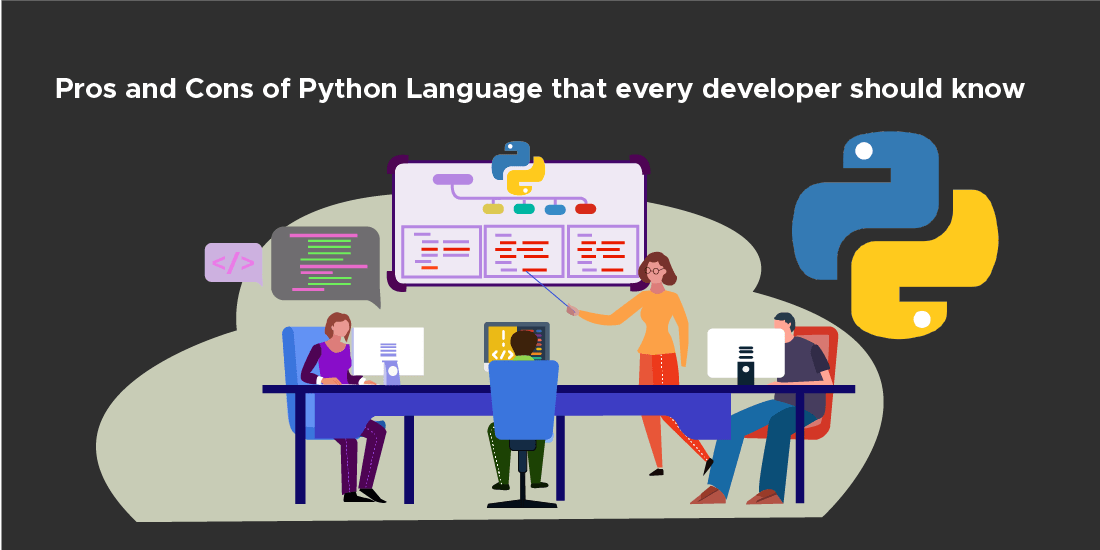 Powerful Programming languages are showing up for decades and with the launch of every other new language, developers are becoming more ambitious to hunt it.

Some languages go very high with innumerable benefits and compatibility they provide to developers and some other languages turn out to be a pitfall.

According to a report from the latest TIOBE programming community index, Python is declared as one of the popular programming languages of 2017, and still, the demand for python heightened up in a couple of years.

So what is the reason behind the immense popularity of the Python language? What kind of features of Python impressed the technical world?

To know everything about Python its advantages disadvantages and other more essential things you need to stay highly focused into this revealing blog.

Are you ready to take in the best information on Python?

Python is known to be a dynamic, flexible, and high potential programming language that every programmer likes to prefer over traditional languages such as C++ and java.

One can leverage Python for building desktop GUI applications, Websites, and also web applications. The simple syntax rules of the programming languages truly fascinated the programmers to go for it as it provides a simple way to read and refine the code and as well as application maintenance is smooth and uncomplicated.

Do you know most of the leading and remarkable apps have built by embedding Python Language?

By looking at the above examples you might be wondering right?.

But that’s the fact Python is widely used as a high-level programming language flooding across a variety of niches including Travel, education, entertainment, social media, and more.

Why it was preferred by those big companies?

So now it’s time for you to learn about the

Advantages of Python Language that makes it Superior

Python is an outstanding platform for newbies who are looking to enter the coding field. The programming language is very easy to learn as it offers easy and simplified code without more technicalities.

It is termed as one of Beginner-friendly language for those who don’t hold experience in the programming field, as python code could be easily written with simple syntax and executed quicker than any other programming language.

Experimentation is easy with the kind of codebase python provides and that is the prior reason for the popularity in the technological and development space.

Python was built 30 years ago since then the language is evolving consistently with new features because of backend community support responsible for taking the developers from beginner to expert level .

This community is made up of smart coders, developers, and professionals that are working their level best to bring more productive outcomes from this language.

A lot of many documentation, guides, and video tutorials are accessible for learners to understand entirely the language.

Python development community is considered to be the most active and incredible community in the technological space.

While thinking to build the best software application you should focus on the quality aspect of the source code as it is essential for making future maintenance and updates more simplified.

As the language is highlighted by the best syntax rules that empower to express of the code without integrating the additional code.

Unlike the other programming language, python is mainly focused on code readability that implies the use of English keywords instead of punctuations

The huge and excellent standard library overshadows python over other programming languages.

The standard library carries numerous modules that enable you to choose as per your specific needs. Also, the modules assist you to include functionality without writing extra code.

Just take an example for building a web application based on Python, you can utilize specific modules for implementing web services, perform string operation, handle operating system interface, and can work with internet protocols.

Adaptable with Major Platforms and system

Their only a few platforms that support different operating systems and Python is one of those platforms. You can use python interpreters to run on specific platforms and tools.

As python is an interpreted programming language it empowers to compose the same code for multiple platforms without recompilation.

This impactful feature makes it easy and effective for you to modify the code without increasing development time.

Python is a highly flexible language that doesn’t remain within itself and can be extended to as many other programming languages.

For example, CPython is a Python version with C,IronPython build compatible performance with .NET and C#,PyObjc or Python written with Objective C.

Python is mostly been used for building Prototypes of software applications quickly and effectively.

It also simplifies the development process by performing coding and testing simultaneously with the adoption of Test Driven Development approach.

The amazing language empowers you to write tests before even writing code and use it to access the app code continuously.

This test is also used for rectifying the application-specific requirements asper the source code.

Python language smooth out the process with automation tasks, there lot many tools and libraries available that make it possible.

You can touch the advanced level of automation just by using some effective python codes.

Python is the ultimate performance accelerator that automates software testing also. You will be amazed to know that it uses less time and few lines of code for writing code for automation tools

Cloud Computing, Machine learning, and Big data are roaring in the Computer science world and these technologies are helping the organization for the advancement of the processes and workflow.

Python is the most popular language used for Data science and analytics. Most of the research and development is taking place in python language due to which one build a powerful application with rich features and functionalities

By looking at the advantages you might be thrilled to use this language for building new-age applications. But as said no language emerges to be a perfect one

Most of the developers hesitate to program around this language because of some flaws.

By coding with Python, developers face some issues when it comes to complicated designs. In the start itself, you hire experienced and proficient developers.

No need to worry the language is completely secure just you need to take some necessary steps for code safety and security.

The complete problem gets sorted out if you perform the right QA testing.

Before writing the python code you should have to set up a work environment for it. A lot of issues arise while setting up an environment that even could affect the programming experience of beginners.

According to us opt for python IDEs that help in setting the required environment for building the best code.

As statically typed language automatically minimizes the bugs and errors in the system.

For achieving the multithreading nature of Python you could utilize Jython, IronPython, Pypy, or C extension.

It’s impossible to find out a perfect programming language that fits all kinds of requirements. Similarly, it goes with Python as well, if you analyze the above mentioned advantages it weighs heavier compared to its flaws. But you can use Python libraries, modules, and frameworks to eradicate these drawbacks.

However, it’s up to you how well you formulate your project requirements with accurate concepts and ideas before choosing Python as the programming language

Willing to build the application based out on Python then you need to get in touch with an expertise Python app Development Company like DxMinds that provides you the secure, scalable, and feature-rich applications with the best quality and affordable costing. We have the best team of experienced and professional Python developers who have built incredible and demanding applications based out on Python as a primary programming language

Let’s Talk With the Experts