Internet of Things: A boon or a curse for business development

Internet of Things: A boon or a curse for business development 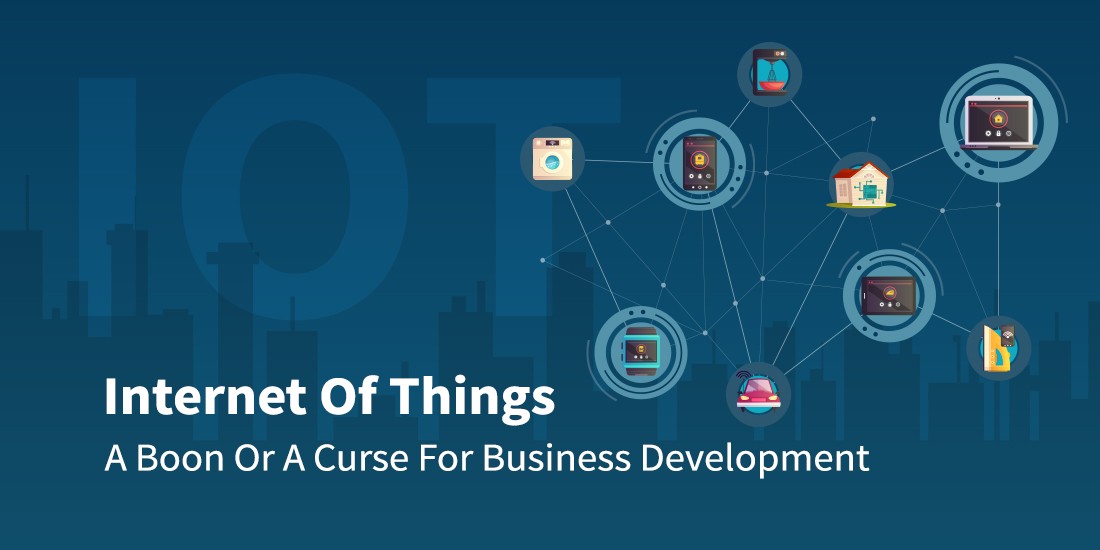 Have you ever thought of accessing devices at your home far from the location of your home? Does it sound magical to you? Then it is not magic or just imagination anymore. It is possible with the latest technological advancement known as Inter of Things, a powerful technology that can give remote access to any physical device. The potential of this technology is not limited to household boundaries. It has proven its potential in other major business sectors too.It has emerged as the biggest reason for the latest industrial revolutions. If summarized, the Internet of things comprises all those devices which are or can be connected to the internet. In today’s technological world, most businesses are hiring IoT developers in India to incorporate automation into their practices.

Using IoT technology, one can add sensors to the devices. It has reduced the size of sensors and has made it easy to fit in the smallest devices too. Right from the small wearable watches to the biggest moving vehicles, everywhere you can find the existence of IoT. This technology has empowered most of the business sectors these days with amazing transformation. The task is carried by combining devices using automated systems. Using the same anyone can make actions from a remote area and also can collect data from the same.

There are several apps developed by IoT App Development Company for various business sectors. The use of IoT is not limited to any sector or device. Are you an entrepreneur and looking to develop an app for your business development but in dilemma either it is the right option for your business or not? Most of the businesses started heading towards hiring IoT app developers in India. If you are still confused then read ahead, here we have mentioned a few examples of IoT app development:

Almost home electronics appliances can be controlled remotely. TV, AC, fridge, and other gadgets too are updated with the help of IoT.These types of operations work with the help of the data collection program. In such procedures, firstly data is collected from the device then monitored, controlled, and transferred using an internet connection. This procedure allows the device to execute functions automatically based on the input received from the internet.

Lights are the very common gadgets that we often forget to turn off while leaving the room. Now we have a wide range of lighting accessories. Now with the help of technology, you can schedule the timing of turn on/off.  Also, IoT helps you to manage the lighting of smart devices and make it possible to manage these lighting devices with your actions.

With the help of IoT, the future will assist you to operate your door closing and opening system too. It will be possible to control your doors with your customized gestures. It can be operated with your facial recognition or many other types of gesture operations.

Windows are becoming smarter too. Now the actions of windows can be controlled depending on the sunlight and rains. This is also possible with the innovation of the Internet of Things. But the actions can also be controlled manually or using a remote, which means the execution of your windows will not be limited to the amount of sunlight and rains.

In the future, you can estimate your gardens to be smarter with an auto-detection of soil dryness and can trigger the initiation of an irrigation system to water the plants, ensuring the plants to be watered timely.

With the expertise of smart IoT app developers, we have got the best automation tools to manage the most hectic task of managing the retail sector. Several retail tasks, such as inventory management, discounts management, billing with bar codes, automated checkouts, supply chain management, and more are done using IoT technology.

IoT app development has brought a revolution in the automotive industry with an enhanced user experience. IoT apps are helping car manufacturers to make it safer than ever before. It is also being the best way for the car drivers to reach out to the destination without any delay using the best route guided with the IoT apps. There are multiple applications of IoT app development in the automotive industry and hiring IoT developers in India is boosting the automobile sector with more innovative ideas and easier management. Few applications of IoT are listed below:

IoT for the medical sector:

The medical industry is also not untouched from the miracles of IoT. A huge transformation has been witnessed in recent years. Eith you talk about the patients or the physicians, both are benefited from the IoT app development companies in India. Most of the manual works have been eradicated from the medical sector importing a technology of machine to machine communication, all credits go to the top IoT app developers in India. Various advancements made by IoT are mentioned below:

There are a plethora of technologies involved in the Internet of Things. The basic concept of IoT is connecting myriad devices but one size fits all will not work when the same technology is being used in various business sectors. Several technologies are accompanying IoT to assist IoT developers in building the latest apps.Let’s get to know all the technologies boosting up the IoT:

The latest wireless protocols are:

IoT is acting as a booster for most of the business industries. Ranging from medicine to aerospace, each business sector has found IoT as one of the most potent tools to connect multiple devices capable of producing, collecting, transferring, and processing data.  Most of the business industries around the globe started hiring IoT developers from India giving a new way of transformation to their industry. Businesses are more concentrated on developing customized IoT solutions that can fit a business requirement precisely.

To develop such an innovative app, just IoT is not enough; rather several technologies are accompanied along with the IoT technology to completely leverage technological advancements.

Yes, of course. With the fast-paced growing technology and an increasing number of connected devices, most IoT applications are developed keeping its scalability factor as a major concern allowing the app to keep a margin to connect myriad devices, features, users, etc. in the future.

A company will need to bear the development and maintenance cost of the IoT application but the profits it offers to your business will be limitless. It will assist you in automating most of your tasks by connecting several devices at once, also reducing the chances of error. IoT applications also bring preciseness to your work culture, ramping up your business revenue. The most important task accomplished using IoT devices is bridging out the missing connections of vehicles, equipment, and devices.

Most of the businesses of various domains are hiring IoT developers from India and the reason is the amazing skillset offered by them. They are highly skilled with IoT friendly programming and also have extensive knowledge in various technologies incorporated with IoT to develop the best app. Also, hiring developers in India will be cost-effective as the pay scale in Indian developers is comparatively lower than that of developers in other countries.

DXMinds is one of the leading companies in offshoring top software developers and IoT is one of the trendiest technologies with which we have assisted several business domains to grow and expedite their revenue. Major business sector our professionals have worked with are home appliances, retail, automobiles, medical, manufacturing, wearables, and many more.