Biggest Trends in Cryptocurrency for 2020

Biggest Trends in Cryptocurrency for 2020 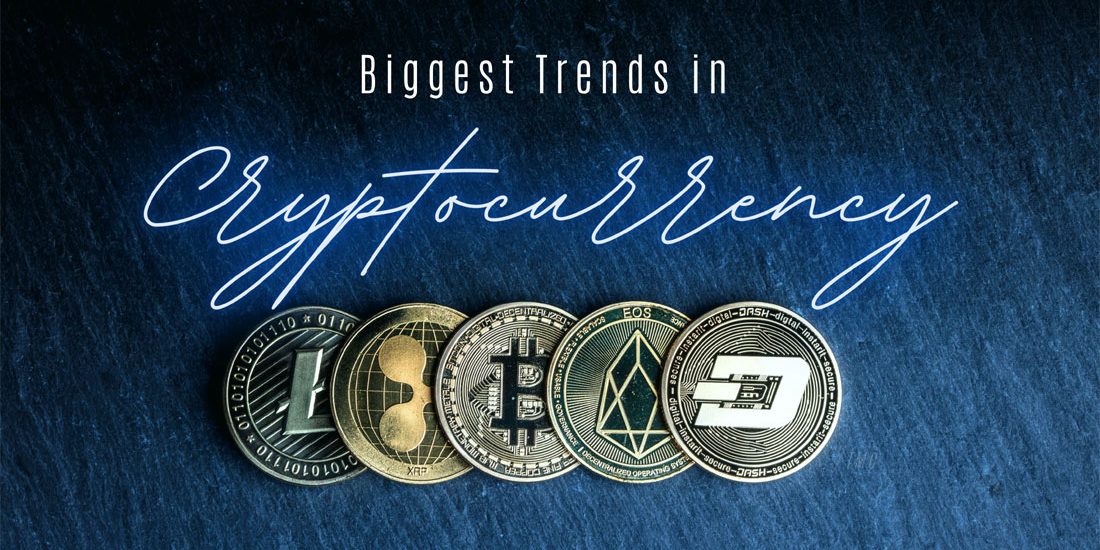 Top Cryptocurrency Trends to Watch Out for in 2020

Cryptocurrency is now more known in the technology industry, especially for those who are savvy with the latest tech trends.

It is blockchain technology’s initial application through Bitcoin that naturally fits due to blockchain’s secured, multi-layer, sophisticated encryption.

Cryptocurrency companies keep working towards legal compliance, and this will put cryptocurrency for mainstream use.

Several tech trends have also led to the adoption of the digital currency, especially since the pandemic. Cryptocurrencies can now be used for fast payments minus transaction fees. Cryptocurrencies have gained more investors, which has increased the trading value of cryptocurrencies as well.

Cryptocurrency is disruptive because of the nature of blockchain technology that backs it. Blockchain is decentralized, democratised, and immutable and transparent.

Cryptocurrency is on the Rise

Cryptocurrencies are currently on the rise.Again, the pandemic made it more popular as more and more touchless solutions are emerging. As we move to a new way of living brought by strict social distancing measures, touchless solutions are trending, and cryptocurrency is one of them. Aside from Bitcoin, we now have Ethereum, XRP, and China’s Digital Currency Electronic Payment (DCEP). Facebook has launched its cryptocurrencyLibra, and Ripple will soon serve as a bridge currency for money transfers and transactionsacross borders.

Stratisis doing well among ICOs (Initial Coin Offering), with a 63,000 %rise in price from 2016. Spectrecoin’s price increased by more than 13,000 % from 2017.Investors are seeing that cryptocurrency has the potential for significant ROI, witnessing the rise of its stock market earnings.

Halving, also dubbed as halvening, means that the reward for miner’s block production will be decreased by half. Halvening is crucial to regulate the balance of cryptocurrency supply and demand, so as it does not get affected by inflation.

There can be only 21 million bitcoins at any point in time, which means a halvening or halving will have to happen once every four years, on average.

The bitcoin halved in May 2020, reducing the number of bitcoins that can be rewarded for the successfulmining of a block in the digital ledger by half. The reduction is from 12.5 to 6.25 BTC.

This event is not new. It has happened twice before, and both events led to some price action with the Bitcoin. In thehalveningin 2012, the bitcoin price increased from around $10 to $100. The halveningin 2016 made Bitcoin surge from $400 to more than double by the year’s end.

This 2020, the halving will elevate the price growth in the supply-side, which makes Bitcoin more expensive to trade. The large dollar earningsdo not fail to drive to attract miners, even new ones.

Facebook has announced that they are releasing their cryptocurrency dubbed as Libra. Libra is still in the works of being cleared for regulatory compliances.

Facebook will not have complete autonomy inLibra. It will get a single vote in its governance, like other founding members of Libra’s association. Visa, Uber, and Andreessen Horowitz are included in this association, who have invested around US$10 million each to Libra project. Vodafone, Coinbase, and a member of the Kushner family have also begun to back this new stablecoin.

A lot ofuncertainties hound this new cryptocurrency, and as a result, Mastercard, eBay, and Paypal Holdings did not push through with Libra altogether.

This year, efforts are on the way to integrating Artificial Intelligence (AI) and Machine Learning into the blockchain technology. It will help drive cryptocurrency transactions.

AI technology will usher in more secure cryptocurrency transactions. Cryptocurrency miners, for instance, will have to go through several layers of computing cycles as they search coins in particular blocks.

Human analysts expand their capabilities with the help of machine-learning algorithms. Yet, even the AI developers and machine learning analysts cannot predict decisions and actions all too clearly. Blockchain explains AI’s actions better than people, allowing users to trace and understand machine learningdecisionsbetter. It is possible because of blockchain and its ledger record all data and variables in every machine learning-led decision.

The AI-systems operating complicated decision trees are black boxes for human intelligence. We can not grasp how artificial intelligence works because we cannot analyze massive amounts of data beyond our imagination, like AI and machine learning computation, can accomplish.

The machine’s memory can hold more data than the brains of the world’s smartest people, and it must define which data is indeed crucial. Human analysts create algorithms that teach machines how to do this, yet cannot forecast how this algorithm will progress.

But if all the decisions of the AI and machine learning system are recorded in the blockchain, we can receive the extensive database and be able to follow the chain of decisions made and why. Additionally, it secures the data since blockchain is immutable.

4.  Regulations on Cryptocurrency Trading to Kick In

Cryptocurrencies experience frenetic fluctuations. While governments are still looking at the safety of cryptocurrency transactions, countries such as the U.S. and China are coming up with new regulatory frameworks.

In Canada, cryptocurrencies will be supervised by FinTRAC.Australia takes on proactive cryptocurrency regulations. Singapore, on the other hand, took a softer approach with the Monetary Authority of Singapore (MAS), since cryptocurrency trading and exchange is legal in the country.

The overriding theme of all these developments is that blockchain is rising, being popular, and finally finding practical usage cases rather than abstract ones.

There are concerns about how to execute transactions across several ledgers or how to control anonymized transactions. Much of this will come in industry consolidation and the ongoing struggle for interoperability between wallets and ledgers. Whoever tries first will probably answer most of these questions. The financial technology companies are by far the most willing to fill that role.

6.  Industry Stalwarts to Set the Stage for New Launches

Several new cryptocurrencies went into nonexistence even before they could get a foothold. Regulatory hurdles dulled the enthusiasm of numerous investors, particularly Mastercard and Visa.

But 2020 will likely be the year for crypto-friendly regulations. Social media giant, Facebook, is launching Libra soon, and by the end of the year, the finance industry’s JPMorgan is out to start JPM coin.

It will encourage more fintech companies to invest in cryptocurrency, like Goldman and Sacks, thus, increasing its market authority and value.Banks and finance companies will soon follow crypto integration, which means integrating digital assets and having several crypto options, like what Fidelity Digital Assetsdid in 2019.

Regulations remain, however, the primary point of contention for the cryptocurrency industry.

Bakkt launched a crypto consumer app. Bakkt is one of the most interesting platforms for mainstream investment money. Its potential is impressive, set apart by its backers and foundering company, which also birthed the New York Stock Exchange. Bakkt also has the support of other big players like BCG, Microsoft, and Starbucks.

After much delays, the warehouse and futures contract facilitator of this Intercontinental Exchange-backed bitcoin is finally operational. It opens a gateway for trade investors to get proactive with the cryptocurrency in a federally-regulatedplatform.

Bakkt’s data feed is also initially free, after which a subscription payment will be required of users, according to the company’s FAQ.

Bakkt’s futures will be physically settled, so buyers receive bitcoin at expiration. The futures accessible from 2017 at the Chicago exchange CME Group are cash-settled.

ICE’s bitcoin futures contracts expire after one day, delivered on the second business day after the contract’s date.Bakkt is also providing a 30-day bitcoin futures contract. The one-day version allows institutions to trade bitcoin more familiarly. This contract is defined by experts as well-designed, enabling the daily contract to “come out of the gate strong.”

Like any technology, cryptocurrencies have their advantages and disadvantages. In the beginning, cryptocurrency was shunned because it was used for illegal activities. Its exchange rate was also very erratic. Cryptocurrency became a security concern when some data miners invaded networks discreetly using their ability to mine for Bitcoin extensively.

Even though cryptocurrencies are exponentially profitable, some people are still reluctant to invest. The lack of intervention by the government or the company can also give way to unrestricted or unregulated trade, unlike the traditional form of investments like bonds and stocks, where investors are accountable to and protected by trading rules.

The benefits of transparency portability, divisibility, and resilience to inflation outweigh the disadvantages of cryptocurrencies. Investing in cryptocurrency has become more accessible and straightforward these days. Recent crises such as a pandemic, massive natural, and economic slowdowns and shutdowns, and even looming international conflict, cause more investors to diversify assets and funds.

In any type of investment, there will always be risks. There was a time when businesses were reluctant to use cloud computing. Massive data breach and malware attacks, and technological breakthroughs like driverless cars, intelligent home systems, and smart medical devices have pushed businesses to use touchless solutions. Businesses have seen that cloud computing is the best digital transformation strategy. Cryptocurrency is like that. As more and more industries grasp its security, usefulness, and profitability, more and more proactive and smart investors shall come. But as an investor, do not just invest blindly. Be knowledgeable with cryptocurrencies and know its ins and outs.