Native Vs Cross-platform apps: Which is Perfect Choice for Mobile app development?

Native Vs Cross-platform apps: Which is Perfect Choice for Mobile app development? 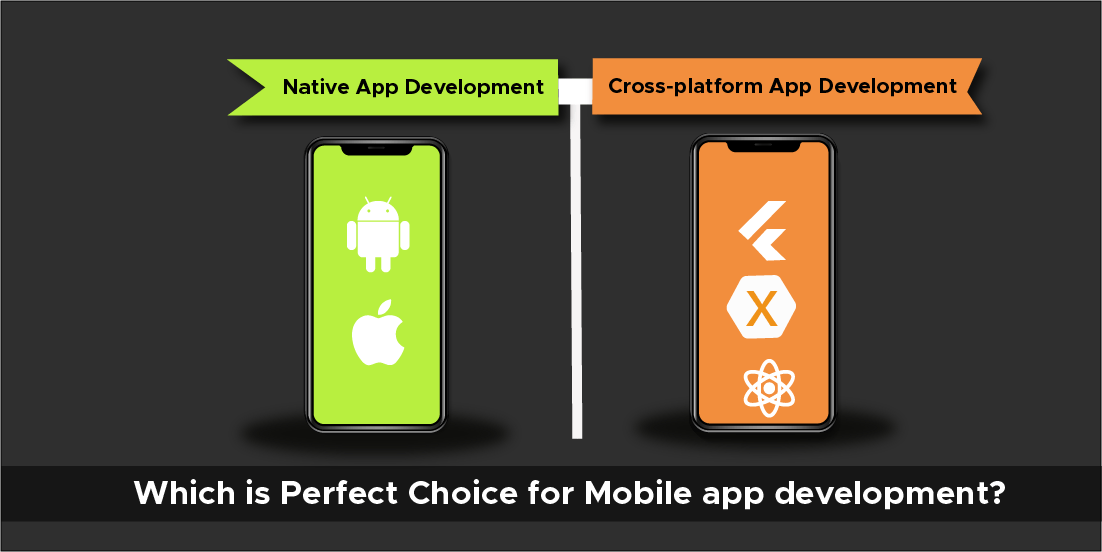 There is big confusion going on in the tech community for decades that is about the Native Vs Cross-platform. As both the Native and Cross-platform development technologies are evolving day by day and have pros and cons, it has become more challenging to figure out the best one.

To make it easy for app developers and owners to stick with the right technology we have turned up with an informative blog revealing the tips and tricks of Native Vs cross-platform selecting the best framework for building top-notch apps.

Be highly attentive towards this blog

What is the Native App Development?

The app focused to develop specifically on a single platform by using a primary operating system language is known to be Native App Development.

Java or Kotlin the high demanding programming language to use

iOS native apps: Objective-c or Swift could be considered as a top programming language and the framework to look for is Xcode.

However, the Native apps take complete advantage of device features such as a camera, accelerometer, GPS, and more. It can be installed through a respective application store such as the Apple app store for iOS apps and Google play store for android apps.

When should you build a Native app?

As per the reports taken from several Mobile app development companies in India most of the client prefers for Native app development when they have enough budget with no time constraints to market or launch their apps.

Every technology that arises or emerging frequently has mind-blowing advantages and some flaws but that doesn’t give a thought that it fails to provide productive outcomes.

Native development serves the ultimate performance when it comes to speed, security, and responsiveness, and efficiency. It is achievable because the native apps focus on a particular platform and is coded with core programming languages and API.

They have the full potential to possess the device speed hence through this lowers the app loading time.

The top advantages of building react native apps over cross-platform apps are the competency to use all the features and functionalities of the platform.

This leads to faster performance and an appealing user experience. Even the native apps can perform without internet connectivity the great solutions for complex or large mobile applications

React Native is an outstanding fit for building stunning apps with ultimate design.

Clearly use native software development kits and aimed for a single operating system, native apps deliver excellent look and feel of the app.

By following the specific guidelines empowers the usual actions and gestures for users and maintains the needed aspect ratio that leads to the best visuals and control over the user interface.

Yes, that’s true as this app is built by using the core language of the operating platform that enables it to offer more security and reliability.

Besides, it is powered with features such as proactive security upgrades, multi-factor authentication, and remote management controls that guarantee high-level security and privacy.

As previously discussed the react-native apps are launched on specific app stores implies the apps get submitted by adhering to the android and iOS app store policies.

Native is known to be the leading choice preferred by both Google and Apple stores and they mostly feature native apps on their store. By getting displayed on this app stores hypes your brand and enhances the download rates of your applications.

The main disadvantage of the Native app development is related to cost.

There are prime reasons behind the high cost of Native apps

Frist is Native app development involves complicated operations to adhere to perfect development and performing such task it uses up huge chunks and Second to reach out specific sets of audiences that is android and iOS you need to build two apparent apps that take two development teams that rise the development cost.

Hazards with Updates and Maintenance

Developing apps on specific platforms need to undergo frequent maintenance and support that seems to be challenging. You must have to hire separate teams for integrating updates and features that going to double the charges

The speed of development is again the main drawback of the Mobile Native vs cross-platform app.

The development time is taken by react native apps is significantly more than the cross-platform apps. And there’s no chance to adopt the native code of one operating system to another enabling in slower development.

What Is Cross-platform App Development?

Cross platform development is the process of building an app that supports several platforms. It empowers you to code once and reuses for diverse platforms.

The key benefit of cross-platform is code re-usability that shortens down the development process.

When we talk about the performance criteria it completely depends on the type of framework you choose for cross-platform app development.

When should you build Cross platform apps?

When you looking to target users on diverse platforms at the same time at a low cost. If the budget is the main constraint to you then cross-platform is the best approach for getting high performance app at a limited cost.

Moreover, the cross-platform benefits you in time and cost but when you consider quality best apps then Native is the King.

As native applications, cross-platform applications also hold some advantages and drawbacks. To learn about those.

It works on one concept Write once and run everywhere. The amazing cross-platform app development empowers you to compose single code that could be utilized for multiple platforms resulting in the reduction of development cost.

This technique facilitates hiring one development team that goal in building a single app for multiple stores.

The incredible cross-platform benefits the developers to reuse 50-80% of the original codebase. A huge amount of development time is saved by reusing the code eradicating the need to write the code from scratch

Through this, you could develop high-performance and functional apps faster.

In today’s world, it is important to update the developed apps, if not your app might be lagging to satisfy the growing demands of users.

Maintenance and support operations take a lot of resources.

That’s where cross-platform comes into the picture

Frequent Maintenance and supports becomes easy when it comes to cross platforms than native apps. The operations are going to be performed by a single team with the same code base enabling to speedily roll out updates with new features for multiple platforms enhancing mobile service.

Quicker development lesser down the time to market criteria. From building an app for multiple platforms to integrating new updates and features across platforms does has become a boon for quicker delivery of apps.

Utmost exposure to a target audience

Cross-platform apps targets on multiple platforms benefit you to reach a huge audience base at one go.

With the cross-platform strategy, a single app is predicted to reach iOS, android, Windows, mac OS according to your business requirement.

This profits you in gaining a wide audience base from all the platforms on a lesser budget.

One of the big drawbacks of cross platform apps is limited functionality. They fall short in terms of operating system features and API and cannot be accessible without an internet connection. This completely affects the user experience of the app.

The cross-platform framework is not adaptable with any 3rd part libraries and software development kits. Due to such inconvenience developers need to spend long hours to select the required functionality need to be integrated into the app

Cross platform apps are built with a single code implies it’s difficult to integrate the application with the local settings. The platforms usually don’t get fitted to target operating system empowers in-app failure

How to Make an Ultimate Choice for your Business?

By studying the above part, you have come across both the technologies and their pros and cons and now you might be clear in making the final choice.

According to us based on your project requirements, timeline and budget you can make a call for the kind of technology you need to adopt.

Still to make the process of selection easy we have come up with a list of elements that gives you a clear picture for choosing the perfect technology between native or cross-platform apps.

With great functionality and Smooth responsiveness

Could perform without internet connectivity

That embrace the device and operating system features and functionalities

That focuses and targets the multiple markets without building particular apps

That is built rapidly in a systematic and affordable way

Still, if you can’t figure out the right technology for building your dream app? Then get in contact with DxMinds a trustworthy and reliable native and cross-platform app Development Company having expertise with experience in building great apps by dealing with the right technology. We understand that every business holds unique requirements and based on that our app development team provide you the excellent app development services that tailor-made your business

Book an Appointment With Experts

Schedule a Callback
Send Message
We are here
Powered by
Hi,
How Can i help you?